Skip to content
In America alone 40 billion glass bottles are produced every year. We use them almost every day and recycle them when we’re done and don’t really think about where they came from or how they’ve changed over thousands of years. A little understanding of the history of glass bottles just might turn you into a collector. So here is a brief history of glass bottles and why they should be appreciated:
Glass bottles were first created in Mesopotamia in the 7th century. Legend has it that glass was discovered by Syrian merchants who were shipwrecked on an island where they burned plants from salt marshes (creating natron) on top of a sand pit. The burning of natron and sand created molten glass.

The techniques for making glass have been lost and reinvented throughout history, but all used some sort of ash and sand. Glass production seemed to have ceased until the Roman ages, where glass vessels were found storing wine and water. Craftsman spent their entire lives learning the art of glass blowing to create useful and beautiful vessels. It wasn’t until the Renaissance that the art of glass blowing took over. The most prized glass was produced in Venice. Venetian glass blowers were given the highest status among craftsmen in the 14th century. Even today Venetian glass is considered some of the finest in the world.
It was in 17th century England where glass production took off. Heavy, lead glass replaced the fragile, elegant Venetian glass. Lead glass was more durable and lasted longer, thus expanding its use for consumer packaging.

In the mid 1800s the continuous basin furnace was invented, so that production could run non- stop, along with a two-person mold press, making custom embossments possible; opening up production for merchants of all type. This was a huge advancement in production, cutting down time and labor.

By 1899 7.7 million glass containers were produced in the U.S. But it wasn’t until 1904 that glass bottle production really took off. An American inventor, in Toledo Ohio, named Michael J. Owens designed a machine that would manufacture 2,500 bottle an hour. This revolutionized the glass manufacturing industry and created tremendous growth in the beverage and pharmaceutical industry.

Across America glass bottle factories opened, creating access to packaging for all types of businesses. By 1919, 22 million glass bottles had been produced. Pharmacies, beverage companies, grocery stores, beauty products, herbalists, chemical companies, doctors with “patent medicines”(a.k.a snake oil salesmen) all had their own bottles produced. Most merchants in towns across America had some kind of embossed bottle stating the company’s name, location and contents of the bottle. These bottles served as packaging and advertising, becoming more intricate in design as production evolved.

The glass bottles made in America during this time are popular among collectors today for those reasons. By 1960 the production of glass bottles turned into a larger scale operation and small custom production ceased. Glass bottles became more widely used for beverages and different forms of packaging became cheaper and more convenient for other merchandise. Glass bottles are now a less sought after packaging material making them not as popular for merchandising and collecting.
American made bottles from the 1700s-1940s are wonderful items to collect. They are a beautiful piece of American manufacturing, design, and consumer history. There is an enormous amount of information available on these bottles. There is the Federation of Historic Bottle Collectors , The Society for Historical Archaeology, The Medicine Bottle Nexus  and even the Little Rhody Bottle Club and so many more blogs and websites to dive into and research your findings.

Nostalgia has an excellent, always changing collection of bottles to check out. These photos are just a few of the bottles that can be found in the shop, so come in and explore! 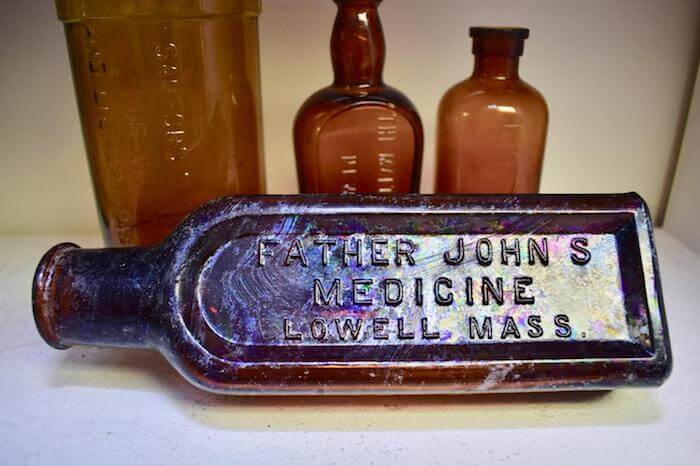 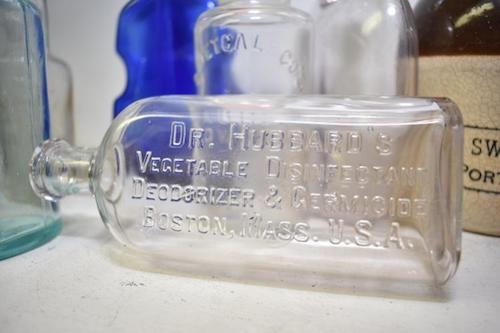 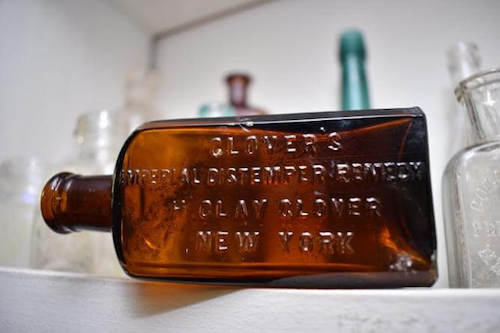