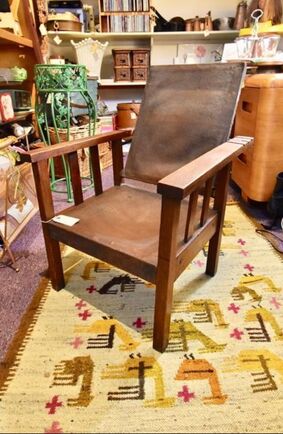 Is that Mission Style, Arts and Crafts, or is it Craftsman? Or is it Morris?! The evolution of the Arts and Crafts movement led to many different off shoots of the style that impacted American and English design for half a century. So, what came first and how can you tell the difference? Keep reading….
The English Arts and Crafts movement was the first to come along in England around 1880. It started as more of a social philosophy, which critiqued burgeoning industrialized labor and the replacement of craftsmen by machines. Many organizations, clubs and societies were formed during this time, to uphold the importance of the handmade versus machine made.  The design philosophy was based around simple forms and traditional techniques, that took inspiration from medieval, romantic and folk art style of decoration. It was more about honoring the material, structure and function of design.

This movement was led by, John Ruskin, and Augustus Pugin. But it was William Morris who is thought of as the father of the Arts and Crafts movement in England. His designs and ideas penetrated Europe and North America. His name is often associated with the American Craftsmen style, because he was not only a designer but an activist and directed his attention to socialist propaganda that spread across the Atlantic.
The American Arts and Crafts movement made its way from England in 1895, with the founding of the Chalk and Chisel Club, the first Arts and Crafts society in America. From there the publication of House Beautiful, which was solely dedicated to the movement spread the philosophy; clubs, societies and organizations started to pop up all over the country. Gustav Stickely led the movement, through another publication called Craftsmen.

Like Morris and Frank Lloyd Wright, Stickely designed homes to fit the furniture he was creating. These designs were made up of clean lines, incorporated natural elements, and did not include any unnecessary embellishments. These homes would be called Craftsmen style, and this would coin the phrase for the American movement. The Craftsmen style was picked up by the masses and the designs were reproduced by Sears Roebuck, offering a cheaper version of the Morris chair and architectural plans for bungalow styled homes. This paved the way to the movements demise, the designs had been commercialized and mass produced, it ended up exactly what it was conceived to be against.
The Mission Style was derived from the American A&C movement, with emphasis on the designs from the American Southwest and the Spanish Missions in Southern California. Although they do not completely fall in line with the furniture designs used by Spanish Missionaries, they did borrow a few elements and further emphasized them. Mission style is mostly simple horizontal and vertical lines made up of flat panels that accentuate the grain of the wood. A lot of the furniture that is produced today is often done in this style.
These styles have no distinct lines that can be drawn to identify one from the other. These were philosophies first, the elements that make up the designs transcend the visuals and are really brought together by their intentions. So, don’t worry about accurately identifying a piece of furniture or style of house as Mission, Craftsmen or Arts and Crafts, because they are all meant to unify not divide.

Interested in vintage wooden chairs? Swing by Nostalgia in Providence RI and see what we’ve got!